Whenever we go to El Bacha, our favourite Lebanese restaurant in Bucharest, we order various cold and hot starters, including dej jawaneh. Dej Jawaneh? That's chicken wings, cooked Lebanese style. They are served in a delicious minty and garlicky sauce I have many times tried to copy at home. Hélas, no matter how hard I tried, it never seemed to be quite like the real thing. However, when Joumana posted the Wings Lebanese-style recipe on her blog, I started drooling all over the screen thinking of all the nice meals & evenings we had at El Bacha. No more dreaming, I acted on the spot. I had tried and failed in the past in my pursuit to make perfect jawaneh, but with a trick I learned from Joumana, these jawaneh brought back the authentic smell and taste of the Middle East.
This is why I am blogging about them today. If they were not amazing, I wouldn't dare recommend them to you.

inspired by and adapted from Taste of Beirut, my favourite Middle Eastern food blog 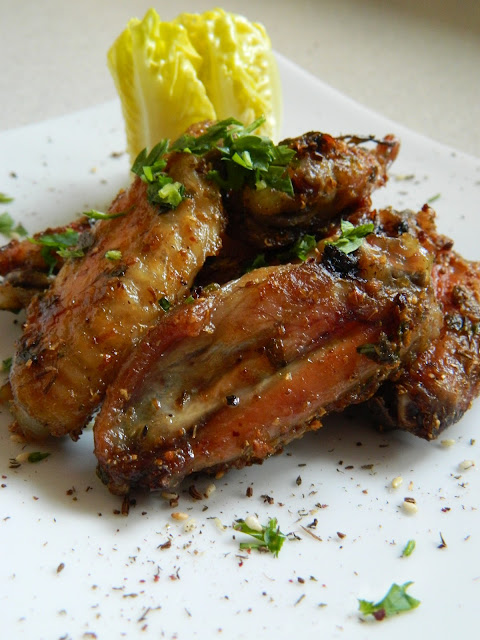 a pinch of salt

a pinch of cinnamon

zataar and sumac to decorate

Rinse the chicken wings then dry them with a paper towel. Chop the parsley and crush the garlic cloves. Rub each wing with a lemon wedge and sprinkle the salt, coriander & cinnamon all over. Add the garlic and half of the parsley. Squeeze the remaining lemon juice and drip some olive oil. Toss. 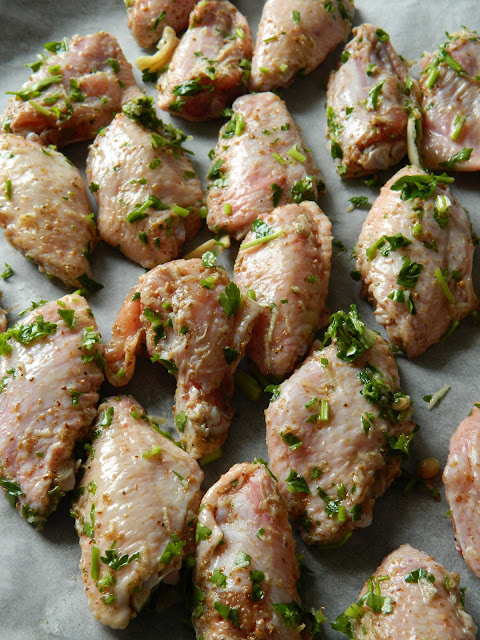 Ideally, marinate the wings for a couple of hours before you roast them in the oven for about 1h. Make sure to flip them two or three times before taking them out of the oven. This way they will roast evenly.
The idea is that the meat should be tender while the skin should be mildly crunchy (yet not burned).  Finally, add the other half of parsley and extra lemon juice, if you wish. Decorate with sumac or home made zataar.

I love the sizzling sound they make when you squeeze the lemon juice and the unmistakable smell of ... a small bedouin town lost in the vastness of the Arabian desert. Grilled chicken, bukhari rice, yoghurt dips, Lipton with mint and lots of sugar :) - that's what I love about Middle Eastern food. Simplicity and scrumptiousness around the table. What more can I ask for?

"In the villages, or in the tents of the nomads, there will often be no furniture. The guest room, mandarah, is spread with coloured rugs or carpets and with quilts, mattresses and cushions laid around the walls for people to sit on. Usually no chambers are furnished as bedrooms. The bed, during the day, is rolled up and placed to one side or, when one is available, in a small adjoining room called a khazneh which is used as a bedroom in winter. During the summer many people in the towns and villages sleep on the flat root tops. The center of the men's room, which is usually regarded as a reception room, is kept empty. The guests sit around with their backs to the walls.
All Middle Easterners are very hospitable. The unwritten rule is to please one's family, guests or hosts. It is a great honour to be a quest, but a greater honour to be a host. When an unexpected guest  arrives a space is immediately created for him at the head of the table and coffee is offered. He must never refuse, to do so is taken as an offence.


When food is served it is brought either on a large dish or in numerous small dishes and placed on the ground in the middle of the room. The guest is then invited to join the family.  [...] Before he sits down at the table the guest will wash his hands with soap and water in a copper basin, or, at least, have some water poured over his right hand. He is then offered a napkin. He must never refuse dishes that have been sampled by others present at dinner, to do so will give great offence. He must comment on the delicacy of the aroma emanating from the meal, pay little compliments such as on the tenderness of the meat or the thinnest of the housewife's kibbeh or the sweetness of the baklava, etc. [...] The master of the house first begins to eat, the guests and others immediately follow his example. Neither knives of forks are used; the thumb and the two fingers of the right hand serve instead of those instruments; but spoons are used for soup,s or rice or other things that cannot easily be taken [...]
Each person breaks off a small piece of bread, dips it in the dish, and then conveys it to his mouth, together with a small portion of the meat or other contents if the dish. The piece of bread is generally doubled together, so as to enclose the morsel of meat.

...The above lines from Edward William Lane's brilliant book Manners and Customs of the Modern Egyptians are as true today as when they were first written in 1836. Very little has changed in the social and cultural attitudes of the average Middle Easterner. Perhaps he doesn't sit on the floor, but uses a table and chairs, knives and forks, has table napkins, several plates instead of one, but the traditional Middle Eastern manners and rules of etiquette still remain".

(Taken from Middle Eastern Cookery by Arto Der Haroutunian, a comprehensive book on Middle  Eastern cuisine I recommend with all my heart.)
Posted by Yolanda at Monday, April 09, 2012