English Mushy Peas - definition: "dried marrowfat peas which are first soaked overnight in water and then simmered with a little sugar and salt until they form a thick green lumpy soup. They are a traditional British accompaniment to fish and chips and sometimes mint is used as a flavouring. All over Britain, but particularly associated with Northern England they are commonly served as part of the popular snack of pie and peas (akin to the Australian pie floater, but with mushy peas instead of a thick pea soup) and are considered a part of traditional British cuisine. Mushy peas can also be bought in tinned cans. They are also sometimes served in batter as a pea fritter." (source: wikipedia)

Hummus- definition: (a transliteration of the Arabic: حمّص‎; also spelled hamos, hommos, hommus, homos, houmous, hummos, hummous, or humus) is a Levantine Arab dip or spread made from cooked, mashed chickpeas, blended with tahini, olive oil, lemon juice, salt and garlic. It is a popular food throughout the Middle East and elsewhere. (source: wikipedia)

Today is Sunday. It's that time of the week when roast chicken tastes better than during  any other day.
And because I went for Harry Eastwood's Best Roast Chicken Ever (free-range chicken pampered in wild mushrooms, chopped parsley, kaffir lime leaves & crushed garlic, among others), it was simply mind-blowing. The chicken turns out to be so amazing, that the author suggests that we should go for plain baby potatoes and a simple salade verte, "with almost no dressing" as a side dish, which is an ideal combination. But I had no salade verte under my roof and I had potatoes earlier in the week....so what could I do??? I decided to make the most of what I already had: a delicious-looking heap of organic sweet peas.
I love peas any season. Fresh in summer, frozen during the rest of the year. But I love mushy peas even more.  To be honest, I love the word "mushy" so much that I'd cook mushy peas every day!  Sometimes we, non-native English speakers, cling to some (favourite) (buzz) words like crazy and we tend to overuse them ://
To me, mushy (as in  romantic, excessively sentimental) is a constant. So you have to bear with me...

Yet, in all seriousness and without being sentimental, I am giving you this delicious fusion side dish/dip inspired by my love for Middle Eastern cuisine and my craving to go back to London to have mushy peas *the original* :) in a quiet pub. 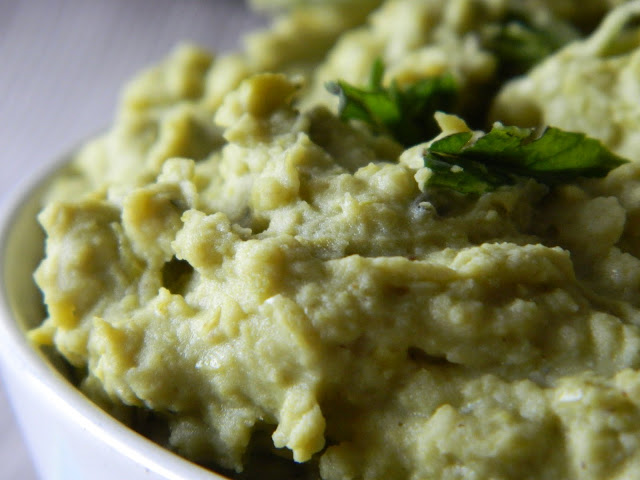 a handful of fresh mint leaves 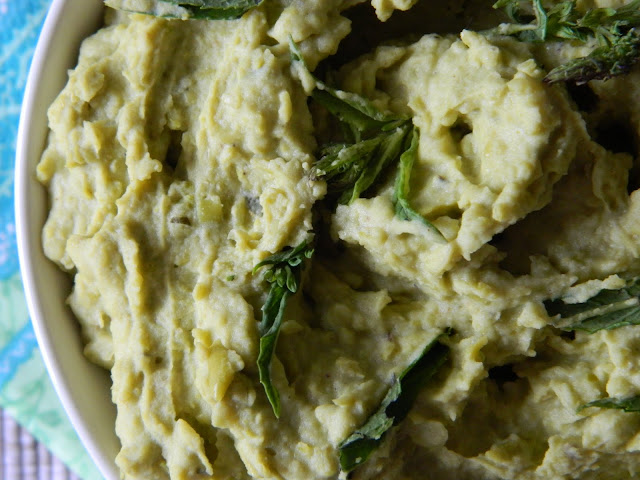 Boil the peas in mint for approx 25-30 minutes until they become soft, then drain the excess of water. Put the peas in a separate bowl with the cloves of garlic and blend them into a puree consistency. Add and mix the tahini paste, the single cream, ground cumin and the rest of the mint leaves. Season with salt and freshly squeezed lemon juice. 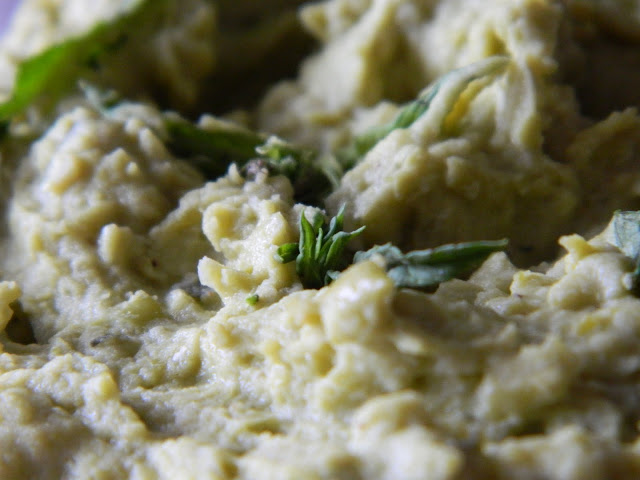 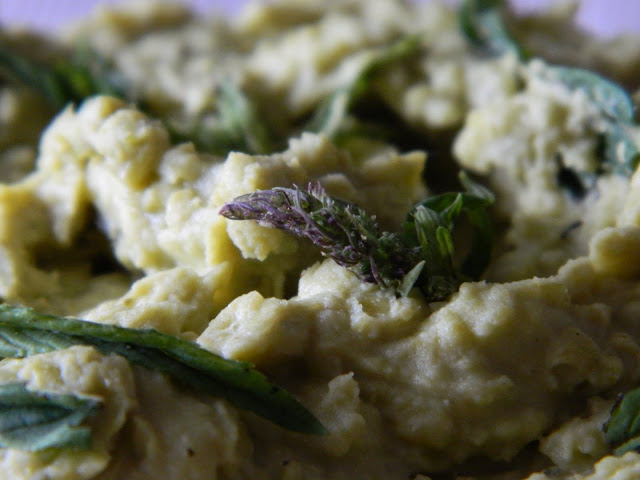 This dish/dip is indeed a cross between Northern European tradition and a staple of Middle Eastern cuisine, hummus. In this particular case, I cannot take sides and vote blindly for Middle Eastern (my favourite cuisine by far). When it's cold and grey, mushy peas with fish & chips seem the most natural option in that part of the world. However, a touch of sesame paste & cumin does wonders to this timeless classic. The unique taste will explode into your mouth literally. It is a great combination of ingredients and a pure example that fusion does work (and it is one of the most beautiful types of creative, original cuisines). 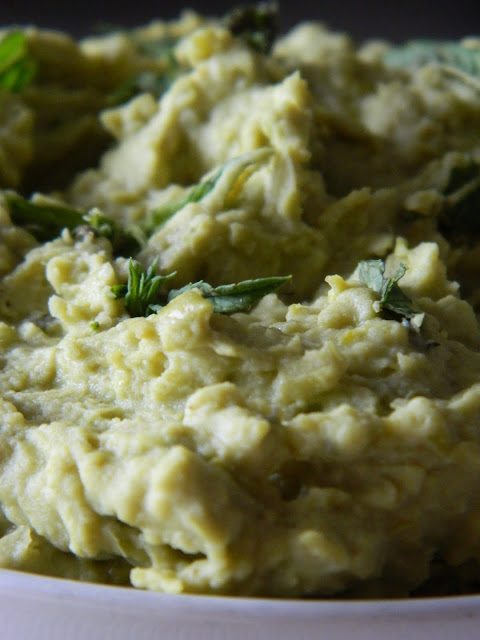 It's so delicious it's already making a great impression for dinner parties with friends as well. :) 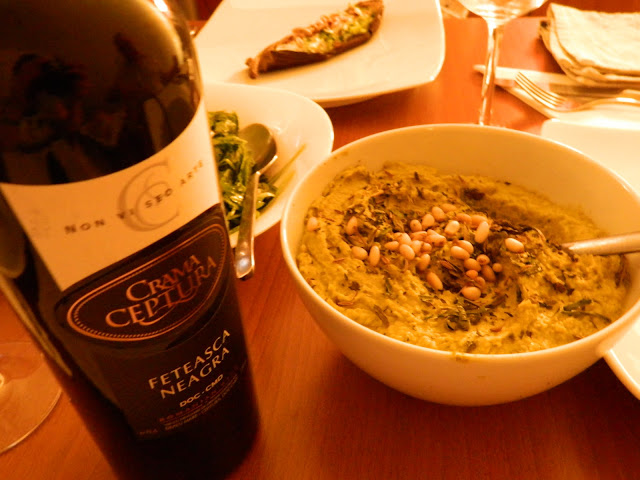 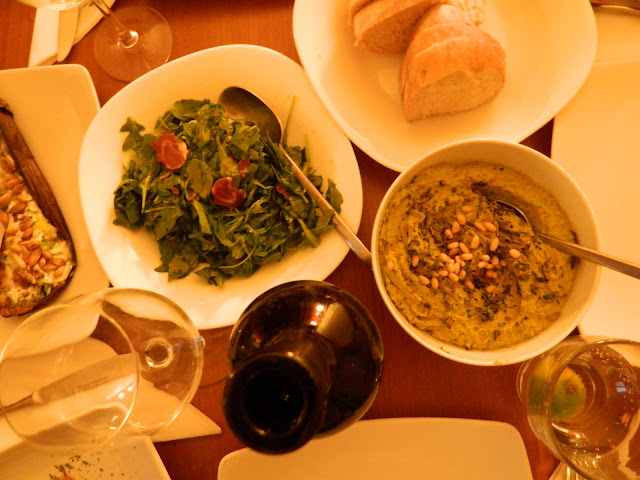