My first Pot-au-Feu was so delicious that it is definitely worthy of a mention on Lemon Love Notes, Facebook, Twitter and other media outlets. :) 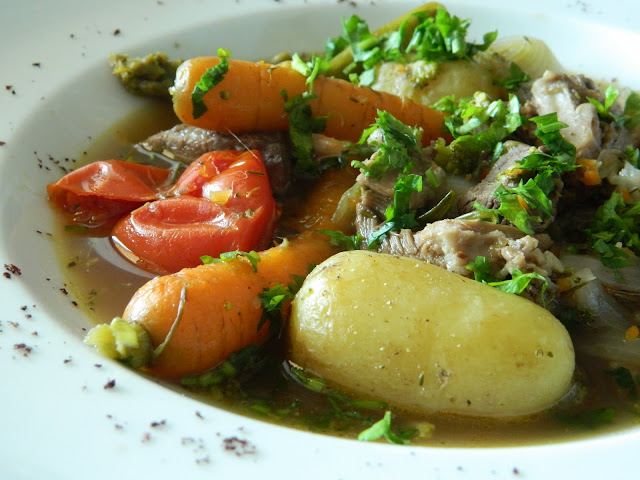 
The concept of pot-au-feu is rather simple- so simple that it's amazing that so few people cook it on a regular basis. I guess that one of the major challenges this dish has to face is the sheer competition with fast food and living life on the fast lane. Pot-au-feu requires our full attention and it is basically a meal cooked and concocted with LOVE. Yes, the big L- love, as in passion, dedication, tenderness, ardour, agape. It's funny how a dish as old as the dawn of our civilization, has become a gastronomic curiosity with a rather strange  name.
Our ancestors did use the cauldron more often than we do today and they cooked their food slowly. In Food in History, Reay Tannahill mentions that "in the fifth century BC, according to Herodotus, the nomad Scythians 'put all the flash into an animal's paunch, mix water with it and boil it like that over the bone-fire. The bones burn well, and the paunch easily contains all the meat once it has been stripped off'. In this way an ox, or any other sacrificial beast, is ingeniously made to boil itself". pages 16/17
If the dish was tasty, packed with flavours and contained a bouquet garni as the Pot-au-Feu does, little do we know.  Apparently the earliest recipes for pot-au-feu emerged in the first half of the 19th century and one of the earliest names of pot-au-feu was pot pourri, according to hertzmann.com. And what an inspired name! Pot-au-feu is indeed a pot pourri, a delicious sweet soup with tender beef pieces and herbs.

Preparation time: 10 minutes (to wash, peel, cut all the vegetables) 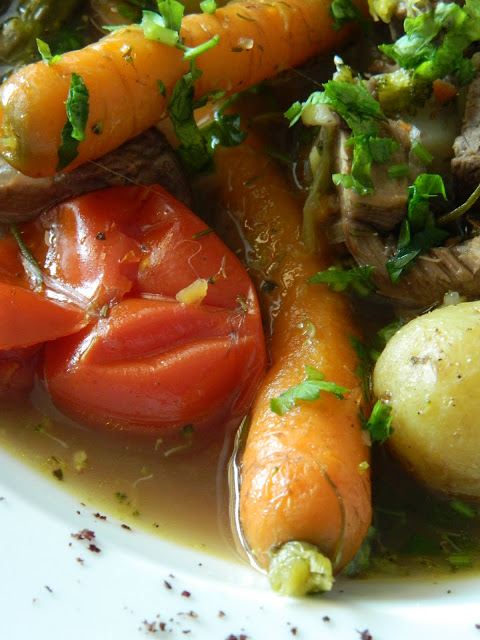 a small bunch of parsley

Wash all the veggies and put the chunks of beef  in a large saucepan. Add water just enough to cover the meaty bones and the lean beef cubes. Add the bay leaves, 1 tsp of coriander seeds, 1 tsp of dehydrated vegetables and the cinnamon stick. Cover with a lid and let them simmer for an hour. Although not in the original recipe, I took the liberty of adding a cinnamon stick (I love cinnamon and I use it often with beef) and to my relief, it gave the broth an interesting flavour.
I chopped and diced some of the vegetables (the leek, the parsley and the white onion) but because I used mainly baby veggies, I kept the rest intact.

Watch over the beef as you need to scoop the scum that rises at the surface of the water. After 40 minutes of simmering add the chopped white onion (cut in quarters) and let it infuse its sweetness for 40 minutes or so.

Have a different pot ready and after approx 1.20 hours of simmering, remove the beef bones and set them aside to cool down. Sieve the soup in the new deep saucepan. Discard the bay leaves and the cinnamon stick.
This way, you will filter the soup and no sharp shards of bone will find their way through the broth.

Carve the meat off the bones, keep the lean parts and dump the fatty collagen-looking bits. Put them back  into the clear soup and add the baby potatoes, the carrots, the cherry tomatoes, 1 tsp of dehydrated vegetables, and a small branch of rosemary. Return the saucepan to the cooker and continue simmering.

30  minutes before the end, add all the green vegetables: the leek, the green garlic, the spring onions, the asparagus shoots.

Decorate with finely chopped parsley and sumac. Sumac is lemony and I love the blend of flavours and textures. The baby carrots and the white onion taste so sweet,while the meat is so tender that it basically melts in your mouth. The soup is clear, but the tiny specks of dehydrated vegetables (onion, carrot, parsley root, parsnip, celery & tomato flakes) have now expanded and formed a delicious kaleidoscope within the soup. 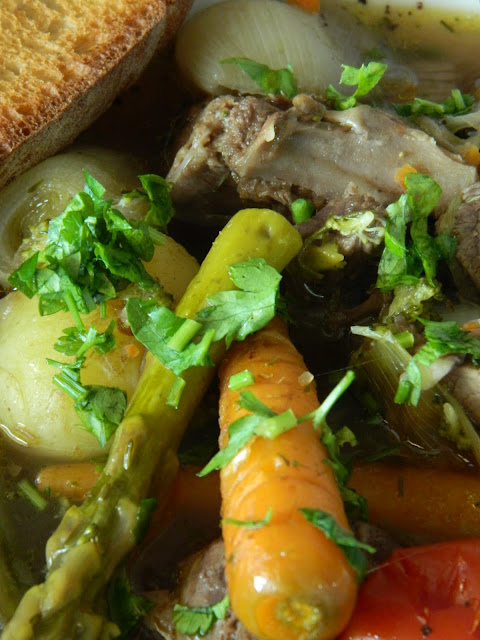 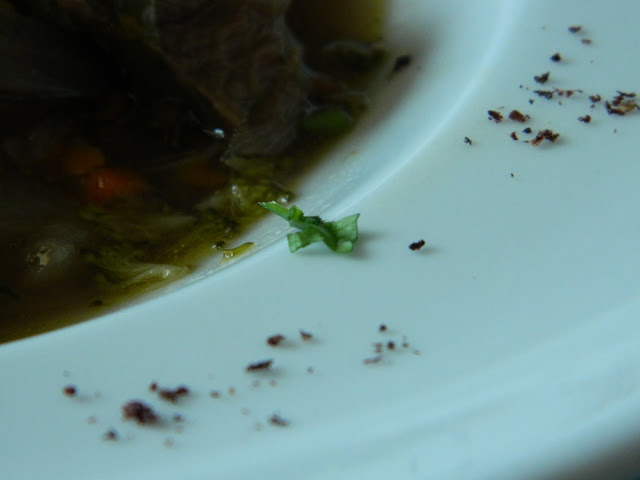 It's strange to think that once upon a time Pot-au-Feu was regarded as "le repas du pauvre", a meal fit for the paupers, for the most unfortunate ones. We are pretty fortunate today to know the recipe of this simple, yet delicate and delicious dish and cook it with love for ourselves and the people we love.

Harry Eastwood says that this dish is one of her father's favourites and that she wrote this dish for him. Actually, her father "is insistent (and right) about making it a day before you want to eat it, so the flavours literally double in intensity and depth after cooking it".

...True. If you can't wait till the following lunch, have it on the day with a slice of baguette, ciabatta, or fresh brown bread with cereal crust, then store it in the fridge overnight.

"The only other imperative with Pot au Feu is to serve it boiling hot".

Maybe I should mention under 'trivia' that there "might be occasional aberrations, such as the adoption of meat cooked a l'anglaise- rostbif, for example and even that interesting variation rostbif d'agneau- but, overall, no Frenchman had the slightest doubt that in matters of taste France was superior to all other nations."  Reay Tannahill, Food in History (page 239).
In a way, it's kind of unfair because recently in Ireland Mike had this beef stew cooked in Guinness and it was AMAZING! I was thinking at the time that once I find good quality dark beer in Romania, I will cook it myself.

However, the Pot-au-Feu frenzy is pretty infectious and I've recently discovered this Vietnamese variation on www.vietworldkitchen.com which is called Sup Thit Bo.

At the end of the day, no matter where you live, what you do and where you come from, the classic Pot-au-Feu will be always adapted to the local culture, the seasonal ingredients, and your own unique personality.