It is a well known fact that, when under the weather, you feed a cold and you starve a fever. And rightly so, at least as far as feeding a cold is concerned. When it's cold outside and you have a cold, there is nothing better than a velvety chicken soup to tickle your sore throat and warm you up.

Type of cuisine: French/European
Difficulty: easy peasy
Time: 10 minutes preparation time and 30 minutes cooking time
Traditionally, Potage St. Germain is made with the first fresh peas and lettuce of the season. Therefore, it heralds spring.  The site www.mahalo.com traces the history of this potage back to the time of Charlemagne, le roi des Francs.
"Charlemagne is credited with first bringing peas to France, but they were usually eaten dried. It was the Italians in the 14th century [...] who first grew “piselli novi”, “new little peas”, that were eaten fresh rather than dried. When Catherine de Medici married Henry II of France in 1533, fresh peas were [...] brought [...] to his court. [...] Within her lifetime France became known for “petit pois”. It wasn't long before someone thought of substituting the new green peas for the dried ones, and Potage St. Germain was born."
Since it was right after NYE and I hadn't seen the inside of a supermarket for a week or so, I made this soup with what I found in the cupboard/fridge/freezer.
Here we go.
From the cupboard: garlic, onions, coriander, a handful of green lentils, a cube of chicken stock.
From the fridge: 2 carrots, 1 pepper, a celery root (just a slice, for the flavour), parsley, and some cream
From the freezer: frozen peas and chicken breast (you'll only need a half)
Method
Fillet the chicken in very thin slices, Asian style. In a mortar and pestle crush the coriander seeds and the garlic. Mix and let it rest. 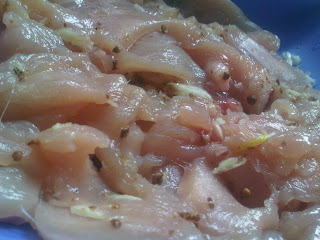 If there are any fatty bits, remove them and boil with more 2 slices of chicken breast to make your own chicken stock. Add the parsley for more flavour.
Fill a pot with water and boil the vegetables. 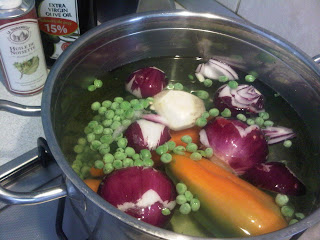 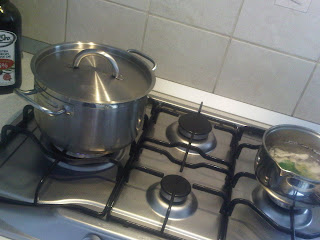 When the vegetables are soft, remove them. Keep the peas. Sift the vegetable soup in a different pot. Add the natural chicken stock and dissolve the cube in this thin, clear broth. (Yes, the taste will be divine) 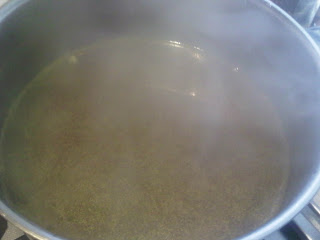 Mash half of the peas with the vertical blender or in the food processor. The rest of the peas will be added towards the end.
Now it's time to add the chicken to cook for 15 minutes or so. Add the mashed peas (and mix slowly) and then the rest of the peas.
Before serving, add a spoon of single cream to make the soup smoother and softer.
Mop it with a fresh baguette. And a glass of freshly squeezed orange juice will certainly chase the cold away.
As a matter of fact, according to www.dukehealth.org, the expression "feed a cold, starve a fever is one of the many pearls of wisdom passed down through the ages by our well-intentioned but unscientific mothers." [...] "The rationale behind “feed a cold, starve a fever” may have been that eating food and drinking tonic helped the body generate warmth during a cold, while laying off the calories helped temper the inner heat during a fever."
No matter where the truth lies, somewhere between myth and truth, there is no denying that this traditional French sweet soup is good both for the body and the soul.
Posted by Yolanda at Monday, January 03, 2011